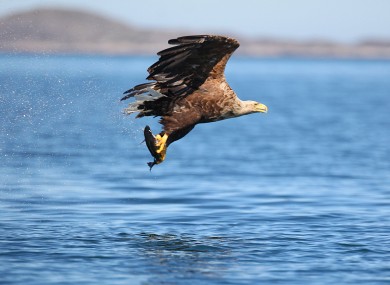 IT TOOK 100 years, but finally a pair of White-tailed Eagles has begun nesting in Co Clare.

It has been confirmed that they are breeding near Mountshannon, in what is the first documented nesting attempt for the species in Ireland in over 100 years.

Nest building began in recent weeks, with the birds spending time in and around the nest site before laying eggs. The breeding pair are a four year old male and three year old female who were collected on the island of Frøya off the west coast of Norway and settled in the Mounshannon area in early 2011.

The White-tailed Sea Eagle was driven to extinction from Ireland in the early 20thcentury.

Dr Allan Mee, project manager for the Golden Eagle Trust, described it as “a truly momentous event for Clare and Ireland”.

“It seems a long time since we collected these birds as chicks from nests in the wild in Norway and to see them now nesting in the wild themselves in Ireland is the day we have all been waiting for. To see eagles back in Irish skies and now breeding in the wild after so long is wonderful”.

He said the trust had hopes that the pair might try and build a nest but because the birds are young they didn’t expect them to breed.The odds are stacked against young first-time breeders because they have no experience of nest-building, mating and caring for eggs and young. They have to get everything right to succeed. But so far so good.Shane Casey, Biodiversity Officer for Clare County Council, said that it is important to remember that this is a very sensitive and critical time for the birds, “and as such we need to show some patience and responsibility, and let nature take its course unhindered”.

Although people may want to see the birds, they are warned that disturbance, particularly during the early stages of nesting when the birds are on eggs, would be detrimental to the pair’s success.

Dr Mee explained: “We are very conscious of the risk of disturbing the birds especially at this stage of nesting. Disturbance could result in the birds leaving the eggs unguarded for a period during which the eggs could be predated or be chilled or the birds could desert the site. We would caution people not to approach the nest area but instead avail of the unique opportunity to watch a nesting pair of sea eagles from nearby Mountshannon pier where a telescope or binoculars will be made available for viewing by the Golden Eagle Trust. Information on the birds, their ecology and conservation will be available”.

Birds can live for 25-30 years and generally mate for life with adult pairs remaining within their home range throughout the year.

Fine Gael TD for Clare, Pat Breen commented: “The fact that a pair of the eagles has nested and laid eggs gives us great hope that this beautiful species can once again become a sustainable part of our ecosystem.”